Mowing marker identifies all observations where mowing events lead to a drop and subsequent recovery in the time series of vegetation index signal, such as Normalized Difference Vegetation Index (NDVI). Algorithm works on any signal where mowing events introduce some sort of a change.

Mowing causes vegetation index like NDVI to drop as it can be seen in the Figure below showing NDVI time-series around a labeled mowing event averaged over close to ten thousand events. For producing this image NDVI time series of each FOI was shifted in time so that observation that has minimal value of NDVI during the mowing event is at day zero. Figure shows that NDVI drops in average for around 0.15 and that it takes around 20 days in average for NDVI to recover to values prior to the mowing event. Mowing marker algorithm searches for such drops and recoveries in time series of NDVI.

Two versions of the marker are available: 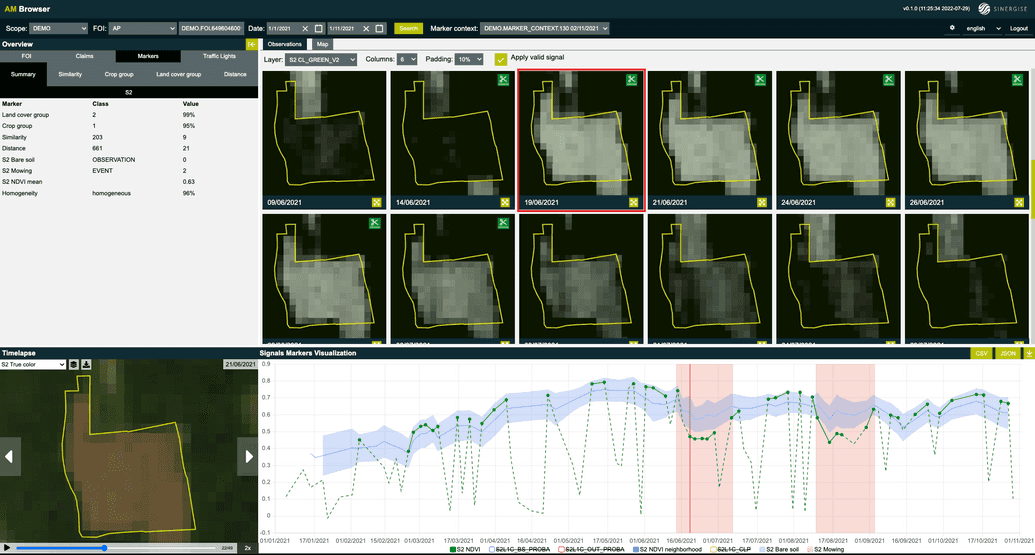 FOIs without a detected mowing event

There can be many reasons why no mowing event is detected. For example:

We have successfully applied mowing marker on different signal sources, such as Sentinel-2 L1C and L2A, PlanetScope, Planet Fusion, and Sentinel-1 coherence. Algorithm works with many different signals, such as NDVI, Leaf Area Index, etc.