Similarity and Euclidean distance markers belong to the group of crop classification markers. Output of both markers can be used to check validity of a FOI's claim. In their essence both markers compare signal time series of a FOI to signal time series of neighboring FOIs. The way the comparison is made is different between the two markers and will be described below. Similarity and Euclidean distance markers perform statistical comparison and don't require any model training, which is their biggest advantage.

Both markers compare a FOI's signal time series to other FOIs in its neighborhood. Area of interest (i.e. Slovenia in this demo) is divided into smaller hexagons as shown in the Figure below. Each FOI is assigned to exactly one such hexagon based on location of FOI's centroid. Distance between the opposite edges of a hexagon is 7.7 kilometers. Neighboring FOIs are pooled among FOIs that are located within the same hexagon, or the same hexagon plus a ring of 6 neighboring hexagons, depending on marker configuration. 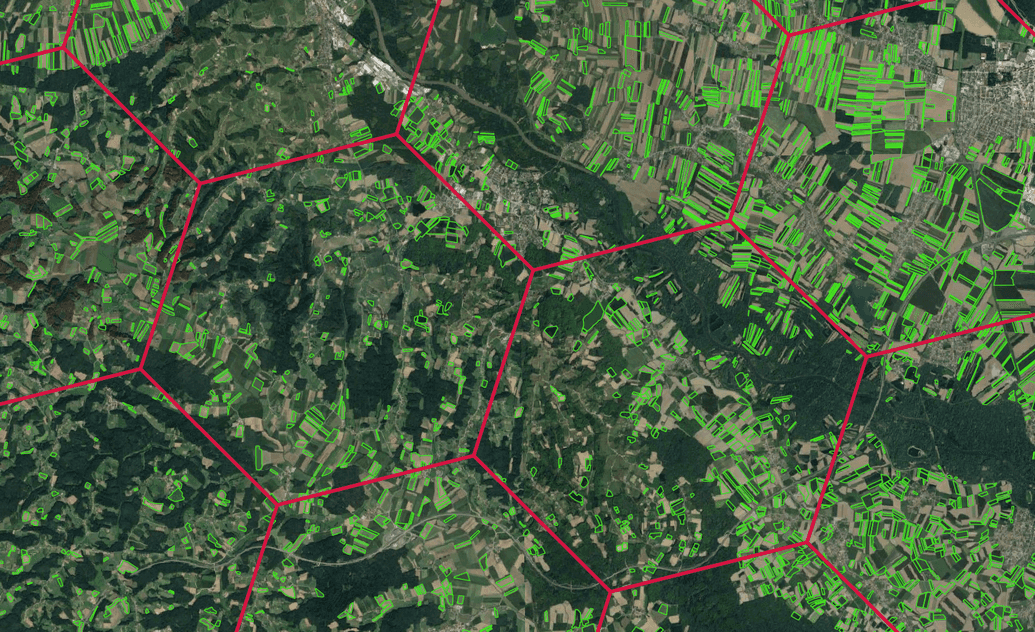 Similarity marker evaluates how similar a FOI is to other FOIs from its neighborhood having the same (or different) claim based on time series of a signal. Typically we use Normalized Difference Vegetation Index (NDVI) for easier interpretation. For example, how similar is a cornfield to other cornfields in its vicinity? Similarity is calculated by comparing a FOI's NDVI time series to an average NDVI time series of FOIs from its vicinity having the same (or different) claim. Comparison is therefore between a FOI and average of many other FOIs that are located near this FOI.

The process of calculating the similarity score for this "target" FOI is the following (we use winter wheat as an example):

Figure below shows the comparison of NDVI time series of a FOI claimed to grow winter wheat and an average of 100 neighboring FOIs with the same claim. Numerator in the above equation, PAi​(NDVI)−Pˉneighbors with crop=Xi​(NDVI)), is shown in the figure with red arrows and the denominator, σneighbors with crop=XI​, is shown with blue arrows. The figure nicely illustrates that the shorter the red arrows are, the more similar the FOI is to its neighboring FOIs with a given claimed crop.

We often refer to crop X as hypothesis. For every FOI we can calculate as many similarity scores as there are different crop types - hypotheses. By doing this we can not only answer questions like "Is signal of a FOI similar to signals of other FOIs with the same claim?", but also "What is the crop type of FOIs to which signal of a FOI is most similar to?". 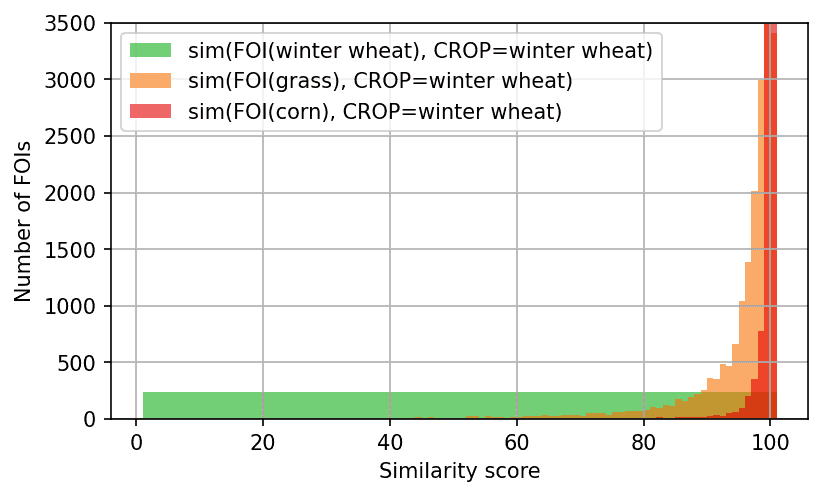 where PAi​(NDVI) and PBi​(NDVI) represent NDVI values for FOIs A and B on date i, respectively. The sum runs over all available valid values within crop specific time interval, which is denoted as nobservations​. If the claim is corn for example then the sum runs over all valid values between May 15 and September 15, and if in the case of winter wheat claim the sum runs over all valid values between April 15 and August 15. These intervals were optimized to maximize the differences between different crop types. Left (right) figure below illustrates calculation of a distance between a FOI with a claim to grow corn and another FOI from its neighborhood with a claim to grow corn (winter wheat). The red arrows show in both figures the difference between NDVI values, PAi​(NDVI)−PBi​(NDVI), for all dates that enter the calculation of the distance between these pairs of FOIs. The shorter the red arrows are, the shorter the Euclidean distance between the pair of FOIs.

The above explanation describes how Euclidean distance metric between NDVI signals of pair of FOIs is calculated. The distance marker score of a target FOI for crop hypothesis X is calculated in the following way: